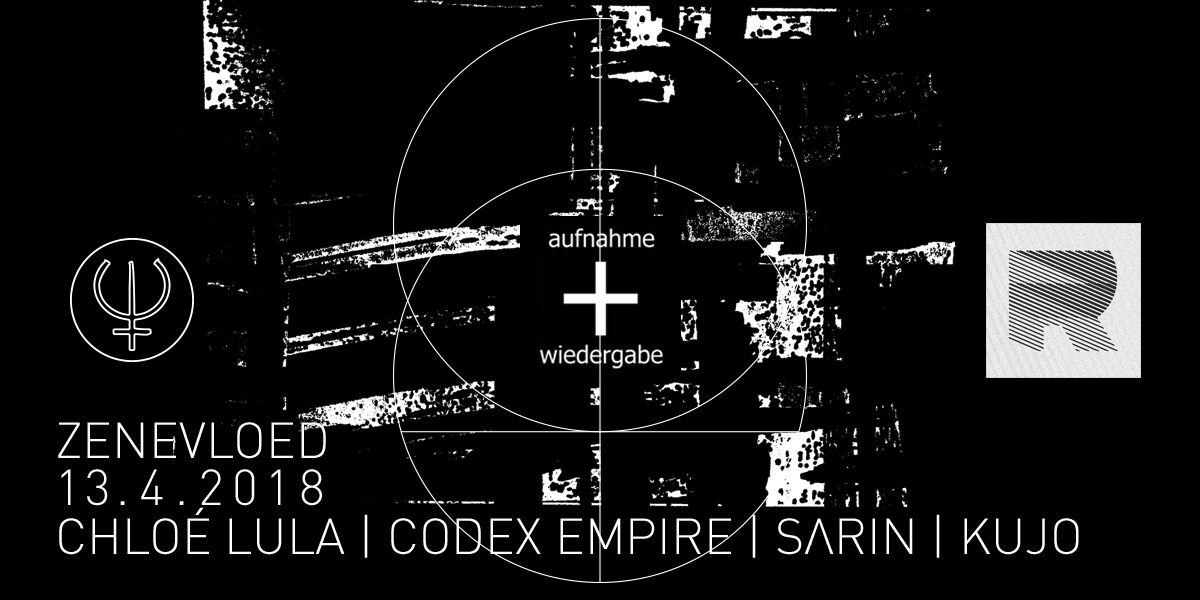 April 13th, we are inviting the [aufnahme + wiedergabe] label for the first time over to the Netherlands, RADION Amsterdam as our destination.
With Chloé Lula , SΛRIN , Codex Empire, and Kujo on our line up, it promises to be an amazing night.

Sophia de Jong doing our visuals. Be prepared for some mind-altering imagery.
RandomZine made the splendid artwork!

San Francisco-born and bred, Berlin-based DJ specializing in shades of wave, EBM, techno, experimental, and everything in between.

Although a relative newcomer to the contemporary techno scene, Mahk Rumbae – the British born, Vienna based producer behind Codex Empire – has been creating challenging experimental electronic music for over 25 years working as one half of industrial/ experimental band Konstruktivists as well as a raft of varied solo and side-projects.

Combining this background in dark electronic music with heavy rhythmic elements makes Codex Empire an intense and simultaneously danceable experience both live and on record. Appearing only as a live act, not as a DJ, Codex Empire has performed in the UK, Germany, Japan, France, Italy, Holland, Belgium, Austria, Spain, Poland, Switzerland, Georgia and numerous appearances in Berlin at Berghain, Arena Club, Suicide Circus and Boiler Room.

“One of the most evil projects currently emerging from the electronic underground, SΛRIN combines terrorizing industrial with menacing EBM and black shades of techno, wave and more. His 12″ from last year, Current Conflict (Aufnahme + Wiedergabe), is one of our favorite releases of the year and the artist is also one half of Konkurs, a project with Blush Response, with an excellent release on Violet Poison’s Veleno Viola.” www.TheBrvtalist.com

SΛRIN is the project of Iranian born audio/video artist Emad Dabiri who cut his teeth in the underground experimental video art scene of Toronto before transitioning primarily to music with his frst EP release “Roten” in 2014 before relocating to Berlin. He is one half of the projects Konkurs & Human Performance Lab.

Kujo is a sound artist from Beirut, whose philosophy behind the project is in parallel with the concept of his record label Modular Mind. The aim is to acknowledge the past but also to push the envelope of current electronic music experimentation, a core element of the project is to challenge sonic expectations as well as creating cultural spaces based around the sound experience.
Kujo also runs Modular Mind Mastering which caters for an underground network of labels in the techno, ambient & experimental electronics realm ranging from Tokyo / Seoul through to Beirut / Paris & Berlin.