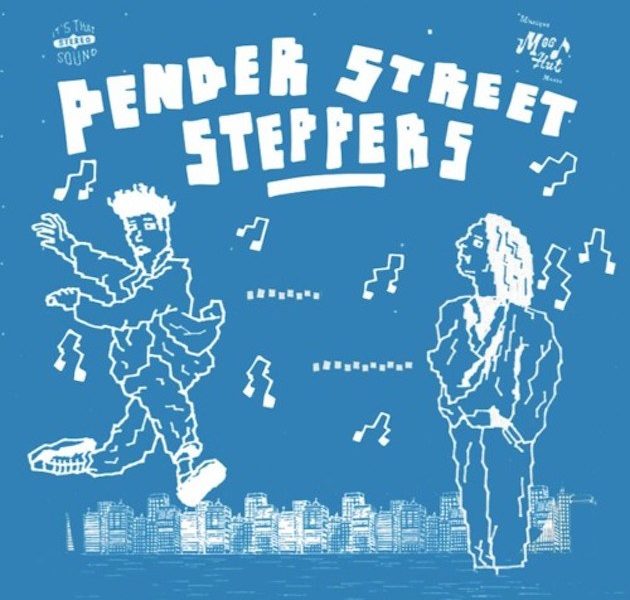 Mood Hut, the beloved Vancouver-based label, keeps reaffirming its presence as one of the most consistently pleasant sources of music around. What started off through cassette-only releases in 2012 by Jack J and Aquarian Foundation quickly paved the way for tracks that have become seminal in the delightfully smooth house sound Mood Hut has created. 6 years later, Mood Hut still managed to maintain their signature smooth, playful sound – a statement that is perfectly backed-up by their latest release.

Liam Butler and Jack Jutson’s earlier releases as Pender Street Steppers, including the timeless Glass City and the Life In The Zone cassette, we still pray would see a vinyl release, offered a glimpse at the warmth and simplicity that life has to offer. Their drums are never exaggerated, always subtly rough and precise, allowing for the melodic element to guide the emotive impact. Pender Street Steppers’ self-titled EP, released late last year, is a testament to all that is so appealing about their releases. Gentle textures and blissful melodies evoke summer evenings as much as sunny winter mornings spent reminiscing about the carefree days ahead of us.

The EP kicks-off with ‘Raining Again’, an ironic name for such a bright and playful opener. The quirky core, coupled with a serenading guitar, hint at anything but a rainy afternoon. Perhaps coming from a city so used to pouring rain, it has led to an appreciation of its calming nature. ‘Raining Again’ was the first track of the EP to be previewed ahead of its release, and certainly kept avid fans of the duo rightfully excited for what was to come. ‘Blackboard’ and ‘Mirror (Dub)’ reaffirmed the simple essence of previous Mood Hut releases. ‘Mirror (Dub)’ at first almost sounds like a fusion of reggae/dub and mellow house. Rolling percussion and whimsical voice-like sounds seem indicative of an ongoing internal argument, yet the lighthearted spirit is still felt throughout. P.S.S. strive with delicate sounds, but there are tracks like ‘Blackboard’ that showcases the irresistible groove they are capable of creating. Recommended for intimate daytime parties or jogs through the park.

Although ‘Raining Again’ seemed to capture the most attention, personally the indisputable standout tracks of this release are ‘Molto Bene’ and ‘No Need’. Both, in their own way, capture what is so reassuring and uniquely captivating of Mood Hut. Is there anything that ‘Molto Bene’ can’t fix with its 4-minute flow of pure joy and delight? Hard to imagine. After all, ‘Molto Bene’ is italian for ‘very good’, a sentiment that can’t be more aptly reflected in a track. Extended hi hats and a beautifully funky bassline lead the way for the most addicting whistling pattern you will ever encounter. Good luck trying to keep it out of your head (but why would you want to anyways). Following the joy of the other 4 tracks, and Mood Hut’s releases in general, being charmfully transported into nostalgia almost catches you off-guard. P.S.S. are as capable of creating euphoric tracks as they are of sculpting conflicting emotion into their sound – as they have with ‘No Need’. Deep angelic pads are coupled with a repetitive vocal uttering ‘don’t stop, baby don’t stop’ which reflects the feeling of first listening to this melancholic closer. This is a rare, but welcome, side not often seen from the duo. ‘No Need’ is conflicted between a moment of pure serenity and being lost in reflective state, reminiscing about moments and encounters that ended too soon.

Liam Butler and Jack Jutson’s latest EP continues their streak of spotless releases. The EP feels like a journey, the musical equivalent of the start and end to anything worthwhile. 5 personal and thoughtful tracks that welcome back the Pender Street Steppers and reaffirms Mood Hut’s ongoing reign of the warm house sound Vancouver has brought us.