A tourist, unknown to its prospected destination, always seeks to figure out the guaranteed must-sees, the indigenous quirks and the secret spots. In this time and age, where everything is well-documented on the internet it is maybe an even bigger challenge to figure out emerging practices.

Being equally interested in electronic music, architecture and (post)modern urbanism, two Belgradian clubbing phenomena initially caught my eye. The first are the very famous splavs, party boats located alongside the Sava river and hosting a thriving nightlife which partly fuel Belgrade tourism. On the other hand I was informed about a more underground location called Drugstore, occupying what formerly was a large slaughterhouse. Nights ranging from a big-room techno sound to a more challenging ambient, post-techno, and deconstructed club music are being hosted in the repurposed industrial building. All serving to educate natives and visitors alike. The hidden layer of clubbing serving as an agent to escape historical turmoil and the weight on current society is only uncovered after a focused look into Serbian history or in-depth conversations with native citizens.

SAUD is an active member of the Belgrade underground electronic music scene. He has curated many nights in Drugstore, such as Sub Rosa summer matinee series in the garden of Drugstore, booked musically challenging names like Aïsha Devi, Strahinja Arbutina, Eomac, Untold, Mumdance, Akanbi, Lakker, Arad & E-Saggila and we had the pleasure to have him over in Feb 2018 under his Gana moniker. Now, with combined efforts of him and another seasoned scene player and longtime friend, Dorian Fuk, a new club night and radio show has seen the light: SUTRA, focusing on future-oriented electronic music. Breaking the boundaries from a stance informed by traditions seems more than fitting when it comes to the wish SUTRA has in unfolding the musical landscape in Belgrade.

Z – Thank you for this interview. It often shows great courage to take matters in own hands and to constitute own club nights in such a niche scene. Even more so where in Belgrade you have to fight for a right to gather, let alone party. What was your initial drive to start programming in Drugstore, and with whom are you operating?

S – Even though the state of the club scene in 2014 (when I did my first Drugstore party) was far better than some 5 years earlier, I still felt I could contribute to building the scene mostly by booking artists that would otherwise only have slight chances to perform in Belgrade. Whenever my mental health allowed for it I had the drive to put energy into the community, believing that collectivist approach to social actions is essential in this (and any other) historical circumstance.

That first party with Lapien/Metropolis and Regen was amazing, but still a financial disaster. Obviously, none of us is anywhere near being able to be a patron of the arts – and even if we were, I don’t believe that individuals should take such patronage upon themselves – so the failure set me back for some time during which I strayed further away from pure techno towards more adventurous club sounds. Booking Aïsha Devi in late 2016 was definitely a risky endeavor, but it turned out to be an experience beyond beautiful which assured me that all the effort was worth it going forward. As you must know, the energy spent, the stress and financial risks sometimes take its toll and can make all the effort seem futile. Of course, the Drugstore core trio of Nemanja, Gega and Bane were instrumental in putting forth these events, without whose continual support realizing it would hardly be possible. It almost goes without saying, but Drugstore is the only club in Belgrade where you can still sustainably book artists from the fringes of electronic music.

Z – Moving from the past nights initiated, which place does SUTRA take in your current electronic music fascinations? What is the aim expressed in the format and mission statement?

S – At one moment we realized that it was time to articulate the movement that was organically growing without a name until that point – that’s how the multidisciplinary rave platform SUTRA was born. The name itself suggests our intentions: sutra means “tomorrow” in Serbian while Sanskrit word Sūtra means “string, thread”, the root of the word being siv, that which sews and holds things together. The concept of future has been slowly erased from the global cultural lexicon and the consequences have been horrible. Capitalist realism eroded all manifestations of the XX century modernist legacy, among which the forward-oriented ethos of the rave culture. It is our mission to explore and repair the continuities of rave modernism.

And then as soon as we have the horizon of tomorrow as a focus, the problem of responsibility comes into play – we are responsible for the legacy and the future of these scenes, this music, these people. SUTRA is pushing for the aggressive optimism that is dead set on using modernist strategies in this postpostmodern cultural muck. Aesthetically – SUTRA is referring to the forgotten treasures of Yugoslav modernist shamanism: the virtuosity of form in the monuments of Vojin Bakić, the euphoric graphics of Lazar Vujaklija, the ecstatic poetry of Branko Miljković etc. 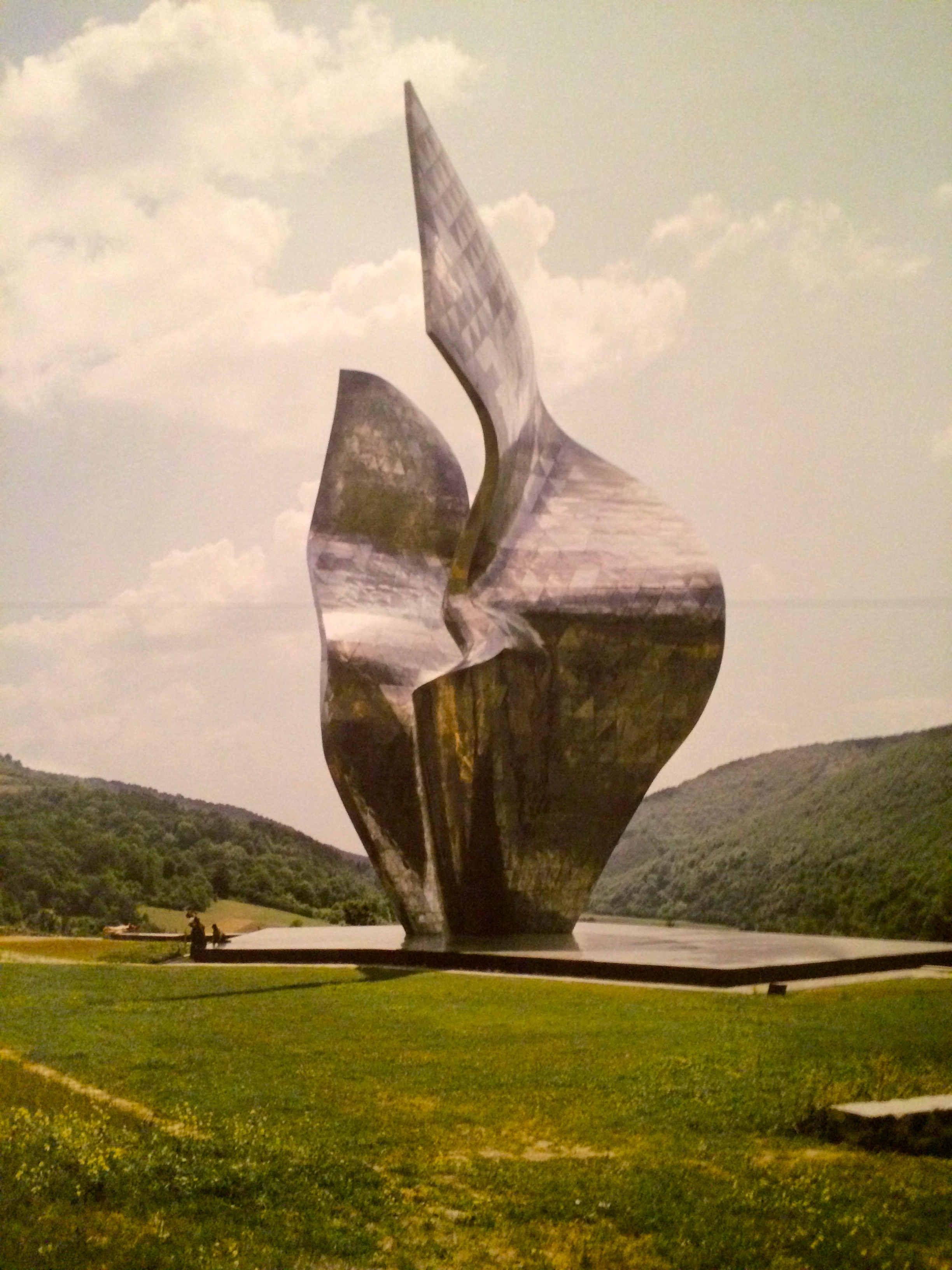 Musically – we tend to gravitate toward artists who are able to play across different genres, rhythms and tempi, those whose work is dynamic and unpredictable, whose use of intensity brings joy to the dancers. We are aware of the difficulties the producers face when trying to release something new in 2019, which is why we feel it is important to praise those who do. Also, we are glad to see this new sincerity in club music where the producers obviously use the sounds from the past but this time they use them without any irony or nostalgia. We also try to explore local scenes and movements across the globe as we see that a lot of the best contemporary electronic music comes from the third (or fourth) world.

Z – In the current (political) atmosphere of Belgrade, with spaces opening and closing at a high rate, is it easy to maintain something long enough to make a lasting impression on people? Do you see SUTRA being impacted by this fluid tendency as well?

S – Accelerating gentrification is rendering downtown Belgrade inhospitable for underground culture, with three popular clubs closing in the last couple of years. Currently there are only a few underground venues operating. Drugstore will hopefully remain secure due to its location. Working with them naturally helps our visibility, but also we rely on our promotional strategy which is simple – to offer strong content.

SUTRA radio show every Wednesday at 10PM CET on RadioAparat.com

Z – We see many native contemporaries you invite. Can we speak of the development of a scene in Belgrade in terms of experimental electronic music?

S – The local scene is visibly changing for the better and we are doing our best to contribute. One of the most interesting developments, and one of the most important fronts for SUTRA, has been the fight to end the false dichotomy experimental vs. functional electronic music – overcoming of which is a welcome global trend. Historically, we have usually had a healthy party scene but never a music production fruitful enough to be internationally recognized, however recently, with developing bedroom production technological capacities, this part of the world is finally able to offer some idiosyncratic music to the global scene/s. But we believe the real boom is yet to come:


Z – On quite a few nights you had also invited international acts or try to incorporate visuals and exhibitions with the musical performances. The latest SUTRA night for example featured Batu (UK) as its headliner. Is this aim for cross cultural and cross platform pollination conscious?

S – Rave is a cultural context similar to opera in the sense that it can incorporate all forms of art and we are using this potential as much as possible. That’s why we say SUTRA is a multidisciplinary platform. Also, internationalism is not only one of the dominant modernist concepts but the reality we live in: our amazing graphic designer (and one of our favorite DJs) Vladimir Crvenković is a Serb who lives in Shanghai and our killer photographer David Stanley is a Brit who lives in Belgrade. When we had Omar (Batu) over, we took him to see the Monument to Kosmaj partisan division from WWII, he was amazed by it and shared this experience on Instagram including the history lesson, which made us really happy. It was a sincere hommage and not just an empty aesthetic gesture. Thousands of stimulating conversations were initiated with our international guests (s/o: Ian, Dara, Jack, Omar…) which is truly a blessing, those connections are very important to us. We insist on cross pollination when it comes to local scenes and we always have a diverse crowd at our raves: the kids, the elders, the goth girls, the hooligans, the gays – all dancing under one roof. 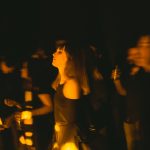 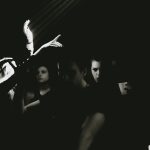 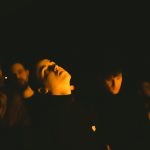 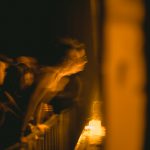 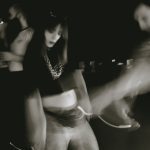 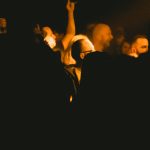 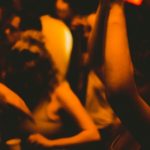 Z – Something even more interesting in this context of weaving a thread, what do you think the (close) future holds for SUTRA and the niche of experimental electronic music in Belgrade?

This uncertain motion shall end

with sun. I can feel the south moving

in my heart. Tiny noon is mocking

in stone, a spark that will enlighten

the stellar system of my bloodstream.

Until then all that happens should be for song. Other

comfort we do not need. That persistence mocks

the threat of some black and poisonous juice.

No, that journey will not end with poison.

Some universe will create us again.

With a blind face and dark heart at least a true word utters.

In stone the little sun that will enlighten us sleeps.

Can you hear the stellar system of my bloodstream!

I repeat: some universe will create us again

over the threat of some black and poisonous juice.