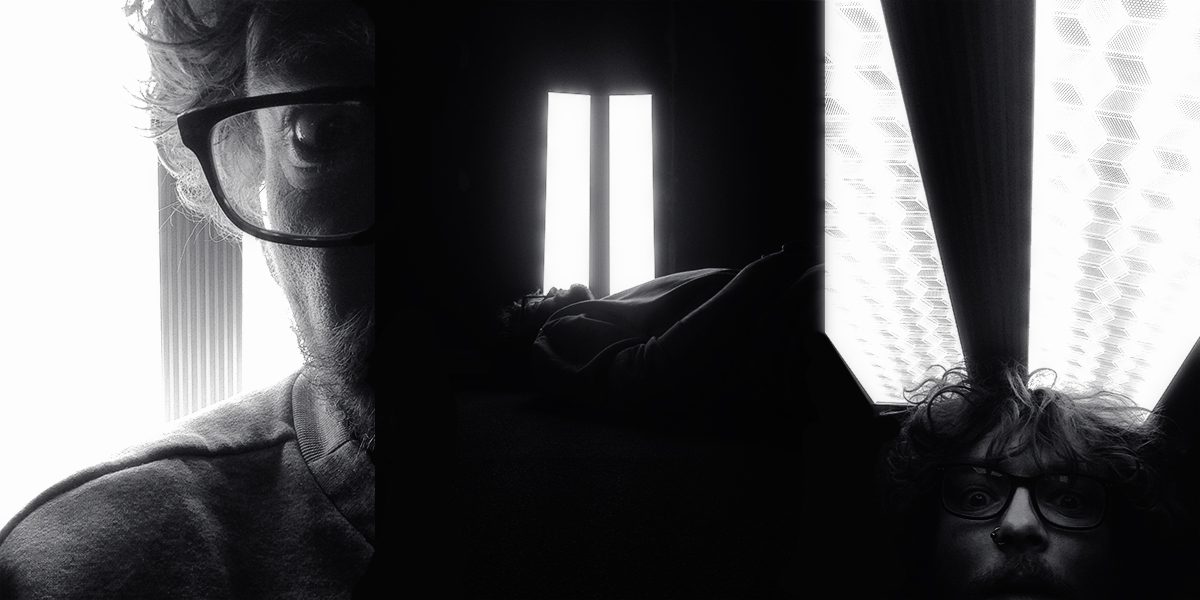 Not too long ago we had asked Dominic Clare, better known as part of the duo Chrononautz or under his solo moniker D.Glare, to contribute to our podcast series. This resulted in a beautiful outburst of creativity and a piece which superseded a podcast, being rather a full force sonic commentary on music. The idea to call it a Mixtape Essay Assessing The Assimilation And Decimation Of Music Genre quickly formed itself and seemed infinitely more suitable. His sharp look on music creation and experimental way of expressing himself prompted us to ask more questions.
Dominic has released two solo tapes as D. Glare on the renown label Opal Tapes, both carrying a very distinct factual title strongly addressing the way the music has been made his latest 4 Oscillators And 130 Samples At 130 BPM and his first 68 Samples At 68 BPM For Phased Head.

“I think about music a lot, all the time, it’s all I do, but I sort of quite enjoy the ambiguity of my alias” explains Dominic “I enjoy seeing the various emotional responses other people take from it without me prompting them with titles and suggestions of emotion behind it – hence the titles of my records being factual information about how they were made”.

Z – Thank you for this interview. One of your latest dreams becoming reality is the build of your own recording studio (link: Declared Sound) combining the best of both analogue and digital worlds. In which ways is this combination an incarnation of your personal way of working? Can you perhaps describe to the reader a day in the studio with Dominic?

I’ve been quite lucky, or maybe I made my own luck, depending how you look at it. I’d long given up the dream of recording, it just seemed unfeasible that I’d ever find or be able to afford the space. I turned to mastering because it gave me the control of the final sounds. I don’t like cloaking things in mystery – I try to help producers with tips for their mix to make mastering easier. My studio is primarily for mastering, but I’ve been fortunate to find a space that means I can go back to my original plan a of recording too.

I like to find the balance of working hard on the perfect sound, but be able to capture those moments of improvisation or accidentals. Sometimes analogue gives the opportunity for hands on instantaneous sounds, sometimes it takes a lot of work and finding the right combinations of processing or recording techniques. Sometimes digital can be so quick and simple that it allows you to be more free and instant, and sometimes it opens up so many possibilities that it’s easy to get bogged down. I’d always rather a band or artist come to me with their ideas to play with and be inspired by the sounds, than coming to me with a specific aim of sounding like someone else. In terms of how a day might work, my studio offers a lot of scope. From staying over in the mill cottage next door, close to Leeds city centre, to eating healthily at the vegan permaculture cafe across the courtyard. The studio itself is the top floor of an old mill, with a lounge and DJ booth where I can talk to artists, work out where they want to take things. It’s all pretty chill and self contained, and as much as I like to experiment and push boundaries in my own music, I really enjoy picking and choosing from my own ideas to compliment what the recording artists want out of their ideas. I have a mastering control suite plus two live rooms, one is a larger space with a beautiful natural reverb of the pointed roof supported by gorgeous oak beams in the eaves, and a smaller tighter live room for a closer dead sound. In terms of recording bands this really gives a lot of opportunity for separation whilst still playing live together, and for re-amping and production work.

Z- As mentioned in the intro, you’re not only working under the guise of D.Glare, but also as one half of Chrononautz together with Leon Carey. You’ve been playing for a while with Leon in various formations, all emphasizing experimentation in music. Would you say that with your solo project you’re more inclined to experimentation during live performances or even during the recording of tracks for releases?

Over time, my solo work has become more conceptual I guess, in the sense that the whole process of making the music is integral to how it sounds or is presented. For me, the beauty in Chrononautz is how Leon and I have spent almost 20 years together playing music and get to explore a relationship that a lot of modern musicians might not have the patience or dedication to foster – the unique blend of two people who know each other inside and out working together. I tend to have too many ideas at once to be cohesive, so the funnelling of my ideas into a framework for each release has helped with my focus as well as opening up new avenues of experimentation that I wouldn’t have necessarily thought of unless I was constrained by the rules of the release.

Z – Your strong opinions about the labeling of music in the current industry might give away a desire to free sound from any pretentiousness, or even an anarchist outlook on any process within the industry. In which way is this observation true?

It would be impossible not to be pretentious to an extent, especially considering I think about little else. As a younger punk I certainly thought more about the industry and how to take it down, but these days I’d rather focus on just achieving what I hear in my head, and helping others push their music to new places. I’m hyper critical and probably negative about a lot of things, but I’m a happier person getting on with things in my own bubble. It’s certainly pretentious to say that I don’t really even consider music as music, it’s art, and it’s always as political as it is escapist, meditative or the brain rush to make you dance. Genres are so limiting, I wanna know where the ideas are at, where it’s taking me personally or society on a wider level. Occasionally I can collate my scattered thoughts more coherently, which is what happened when we were talking about music when you’d asked me to make the mix. I live in the cottage, work in the studio, sound engineer at the diy venue Temple Of Boom down in the basement and help out in the permaculture cafe. I couldn’t give a fuck about the industry or trends, I’m just intent on sustainability and living my life in a way that enables creativity, doesn’t screw people over, and maybe inspire one or two people to achieve their dreams or make the world a better place somehow.

Z – With the output for D. Glare being two solo albums on Opal Tapes, would you say that your solo work will be less in terms of the amount that will be released as opposed to the Chrononautz work? What lies ahead?

There’s mountains of everything I do. Collaborations with people like Rick Holland (see Pattern Man) or as yet unreleased stuff with Keeley Forsyth. Chrononautz has always been prolific, we recorded every improvisation of two four hour sessions a week for about three years. I make endless amounts of solo material, lots of which I end up stripping away and re-using my favourite moments as samples for future stuff. I have two more albums due for release on two different labels, as well as two 12″s on the way for another two labels. I’ve never been someone who sends my music to labels looking for releases, unless I’ve made something and feel like it fits what they do, so I’ll usually self release or wait until a label asks me for something.