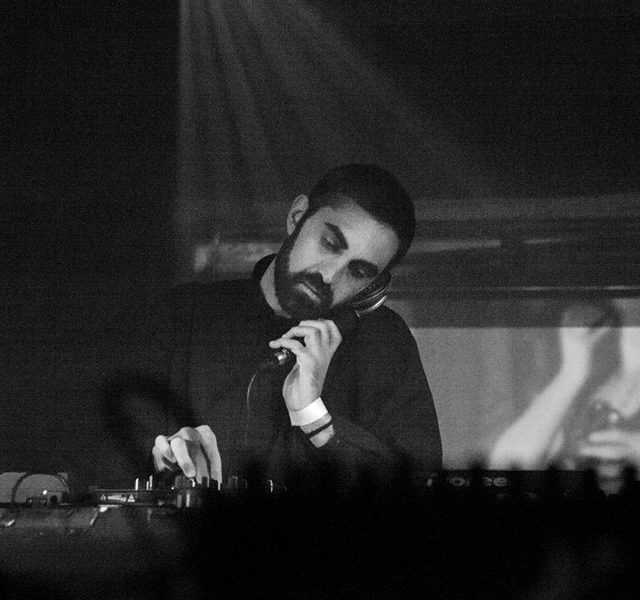 “Devianza” is a new way of conceiving electronic music, a sort of ‘sonic socialism’ which involves the sharing of music projects developed by Blackwater Label”. This is exactly why we felt the need to talk to Pier di Sorte, better known as Devianza. A man engaged in transmitting music containing extraordinary emotion, whether it be under his own moniker, as a vision for Blackwater label, or its sub labels or even the event series (Ambivalen+ in London, which he co-curates). All share the same drive for the audience to take part in the magic that is created on wax or live.

Z – Thank you for this interview. Your first track that I had the pleasure of listening to was “Il mare di Capalbio”. I felt that the video belonging to the track (link) immediately transported the listener to a bittersweet feeling of nostalgia, which goes perfectly with the dreamy ambiance of the track. What can be said about the connection between the production and the seaside town of Capalbio, is a brief hint to the rise of “Blackwater Society”. Care to explain?

Il Mare Di Capalbio is basically the first cell, the first “sound” that gave birth to what Blackwater Label nowadays is in terms of artistic proposal.

When I made the track at the time I was struggling with years of ‘darkness’ in terms of music production and in terms of possibilities to move free within in the music industry. I was completely out of the game, I had given up for a long time since that day. When I was sitting in Capalbio seaside, alone, suddenly the light struck me. I said to myself that my way of doing things was probably was not correct and that there surely was another way other than sending my demo’s to different labels; I should start my very own label. in a very melancholic mood I then decided to work on this track, as a ‘homage’ to my unexplored childhood. I agree with you regarding the video, I think it will hit a sweet spot for all the people that didn’t have a chance to express themselves yet.

We came to Luciano Lamanna Studio in Rome to work on the track. After it had been mastered by Andrea Merlini my Team and I decided to press the track on Cd, starting our tour through italy where we would hand out copies for free at the biggest festivals of Italy; FLUSSI and DANCITY. I don’t think it was a success just because of the track, but also due the way we acted; we had a direct connection with the people. That’s how I think we differentiate from other labels: we’re directly in touch with the people, we get a message and we are instantly responding, whether you mail or call. Il Mare Di Capalbio also got pressed on vinyl today, thanks to the efforts of those people that run Blackwater. The same people that hosted me at FLUSSI, Phorm and PRG/M, and helped me spread the word, are now part of the Blackwater Label – having made their own interpretation of the track, too.
Z – Other productions of yours also share this intertwining of visual memory, physical places and sonic dreams. Evolving from these dreamlike escapes of reality, you also offer a darker side in the form of post-techno/dark experimental. Are these remnants of the past personal anecdotes you would like to transmit to your audience?

P – Well I grew up studying the classics of literatures and I’ve been always fascinated by the “stream of consciousness” from James Joyce (link) for instance. I’d like to express what I have to say. Unfortunately I can’t express myself with words because of the profound nature of my thoughts. It feels impossible to voice some of those inner feelings. This is obviously related to me as an artist, but also as a label owner. I’m always looking to release productions that is more than just a tool track or a dance piece. I prefer looking for and listening to the emotional side of the music. My musical influences come from the ‘80’s in terms of sound and ‘attitude to life’. I think that it invokes some kind of melancholia that i always felt. It is obviously related to the fact that nowadays, life is more dark compared to the ‘90’s. I don’t think the times we’re currently living in are ‘good’ times and this is reflected in the music we listen to, and in this case related to the music we produce: a mirror of our society.

Z – Could you enlighten us a bit more on the goal of ‘sonic socialism’ mentioned in the intro? How exactly do you envision this and is this an ideal especially needed in the current music industry?

P – Well, sonic socialism is our goal. Unfortunately, it is not that easy, especially in a world runned by capitalism and globalization. Having a socialist approach to music is certainly challenging, though. Blackwater is expecting in terms of Team is exactly this. All the people involved in Blackwater are involved in an horizontal way. There is no hierarchy, leader or rules. As I said, we came from the ‘80’s from the Punk/Rave scene in Italy. Especially in Rome we believe this attitude is very good for the music industry, unfortunately Rome is a place where “rules” are very strict and are related to the capitalistic world we’re unfortunately living in today,but we don’t give up!

Z – Blackwater has 3 sub labels (Kapvt Mvndi, Goldenboy and New Forms of Beauty). In which ways do these labels push the boundaries for its parent label?

P – The sub labels we opened so far are basically extensions of Blackwater. We opened Kapvt Mvndi in London when we felt there was a necessity of exploring a different type of sound; more rough and more experimental, diverging from the main label. we suddenly came out with Goldenboy, a sub-label we use to develop the sounds from the people (that are also artists) that run Blackwater. The last sub-label NFOB, New Forms Of Beauty, is more of a musical label that urges artists to express their knowledge of electronic music in a more musical way. Summarising the sub labels are just the fingers of the body. They move the way the mind wants them to to move.
Z – As we could read in the intro, you also embarked on setting up a new event series named ‘Ambivalen+’, hosting not only residents of the label, but also very respectable artists like Codex Empire and Samuel Kerridge. Is the definition for the word ambivalent, the unsure feeling about a subject and the pause to think about the sensation it evokes, one you try to transfer to the event series?

P – Living in London is particularly tough for an artist as there is almost no possibility to express yourself, this is a fact. I decided to move forward from the production itself, probably to feel more alive than i felt while being in the production experience. Regarding Ambivalen+, it has been created in order to give the people the chance to understand what our message is; meeting us, knowing us, watching us and touching the ambivalence between what we are and what we are experiencing. I personally decided to use this word and the symbol + as a homage to Joy Division, in particularly to the track Atmosphere. As I said, living in London is stressful, especially if you make Techno. Joy Division released this track in order to ‘destroy themselves’ in terms of sound, or just as a statement “Hey guys we’re a little bit tired of all this schizophrenic attitude, we need to think about it”. I’m doing the same, I’m telling myself and to the people that follow us that we constantly have to think about what we’re doing and where we’re living. It’s the same old story in the end. We didn’t invent anything and especially in music we always moved the same wheel, maybe the road is different, but music is music; a mirror of the society.

Z – So pushing the boundary on the placement of contemporary techno music in an unorthodox environment is something Ambivalen+ is supposed to do. With varying guests the sonic experimentation is set. But what can be imagined is the difficulties nonconformist spaces like cinemas and hotels bring to a performance needing a certain ambiance and technical functionality. How do you go about choosing a location for the event series and tackling the challenges that go with this?

P – Ambivalen+ is a sonic laboratory for Proto Techno and all forms of experimental music. I’m glad that all the major artists worldwide are looking at this as an interesting format, especially since Ambivalen+ is evolving every time. Yes, we change guests as we change our venues, because we need to express ourselves in a profound way. Doing so we’re obliged to be real every time. It’s risky, OK, but we’re Punk, aren’t we? So the first take is the good one, we honestly don’t care much about making mistakes, as long as the message is good. Let me give an example, in the previous gig we had a 2’ interruption during a live set but you know what happened? The artist started speaking and interacting with the public and guess what? It was magical. Ambivalen+ is not a party and probably also isn’t much like a gig. It’s an idea, a format to think about Techno for people involved in Techno as a culture. We detest the idea that Techno is related to dance, drugs, fashion and shit like this. We take it seriously, it’s a state of mind.

Z – Pretty soon you will also be exporting Blackwater to Spain for a little tour. Can you shed light on future endeavours and are more exports like this one to come?

P – Well the story is matching my real life obviously. I’ve started Blackwater in Italy and Italian artists became involved. Then I moved to london and we expected a change of setting. Now I’m having this interview from the Spanish territories. Especially in Coruña I’m exploring the sound in order to develop what we have acknowledged so far and we believe that Spain is a suitable territory to develop ourselves further. It’s a fact that Esplendor Geometrico created a network so big, that we can get out of Spain and get back in again. As is said, history is a story which repeats itself and the same goes for music. We listen to the same music, every time and we hope to be a part of it.