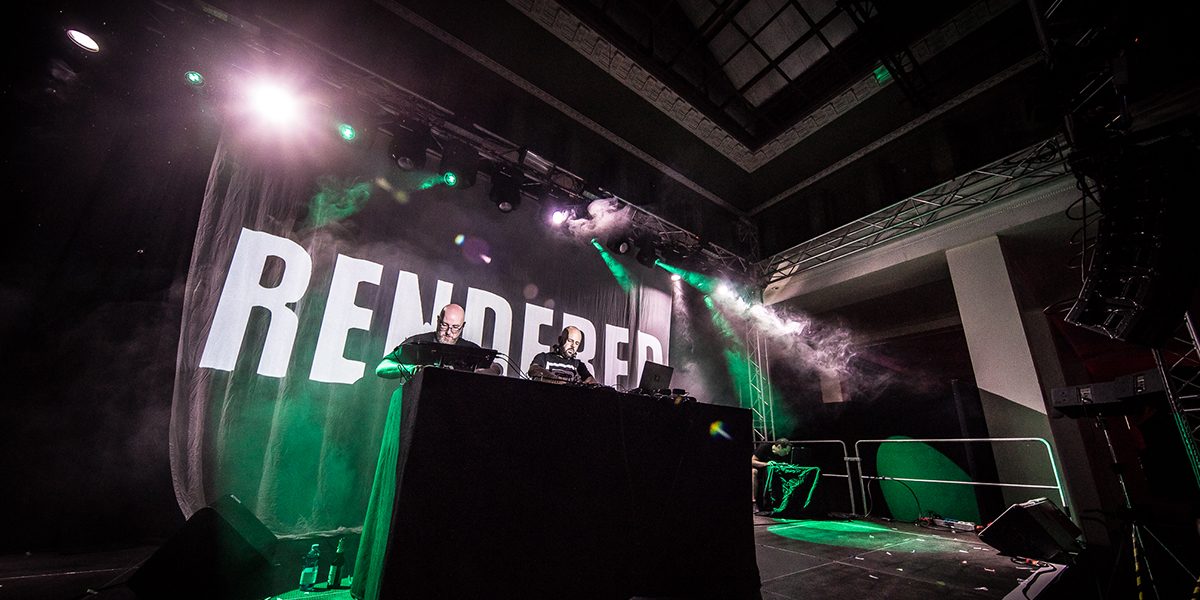 With the current power-surge of EBM, Industrial and its little brother Rhythmic Noise, comes the renewed exchange of these genres with techno; creating a more danceable vibe for late nights out. A fruitful exchange caused among other things by the revival of warehouse parties promoted for larger crowds, after the “death of techno” in the early 00s. Where Industrial and EBM were born from translating the chaos and decay of the industrial society into pieces of revolt and socialist realism, the current movement seems to hold a more hedonistic approach, in tune with today’s capitalist reality. Both however hold the experience of the performance and the will to experiment with sound in high regard.

Numerous new acts have been born in the past years, inspired by musicians like Adam X, Thomas P. Heckmann, Throbbing Gristle, Nitzer Ebb or even Kraftwerk to accommodate for the fresh taste in town, delivering some amazing hits and blatant misses.

However, RENDERED, the duo comprising Clément Perez and Daniel Myer proves to be a fresh breathe of air deriving their strong and unapologetic sound from their long career prior to the collaboration.The German and French duo have released their freshman EP HOLEINTHEHEAD on Aufnahme+Wiedergabe and have subsequently delivered output for the renown labels FLEISCH and Body Theory. Alongside these steady releases, their energetic performances alongside other members of the A+W family show that they aren’t here just to teach Industrial Techno 101. Quite the reverse, they are here for the long run.

Z – Thank you for this interview. With the main solo projects 14anger (Clément), Haujobb, Covenant and Architect (Daniel) already having created fruitful results over time, what thought lay behind the formation of RENDERED and how long did it take to actually begin releasing material under this name?

C : We began working together last year, around the beginning of the summer. A couple of months later the first demo was ready and we quickly signed on the 3 labels.. For me, working with Daniel is a real motivation as I’m myself a big listener of his own projects for a long time. We first spoke on Facebook about working together on some of our different unused demos and I can say that the first results were already great. So we both took the decision to make a ‘real’ and long term project. It was also, on a more personal view, a good way to work on something different than the tracks I’m making solo (in a more rave/industrial way).

D : I agree. I knew Clements work mostly from remixes he did, and I had a bunch of tracks already laying around. I just needed the right catalyst, if that is okay to say. So Clement gave the tracks the special twist they needed for the dancefloor.

Z – Having your first EP as RENDERED released on Aufnahme+Wiedergabe, what reaction did you expect of your demos at the label and later on the EP with the crowd?

C : A+W is definitely the label we were first thinking of for our tracks. We are really happy to be part of the family and we were a bit anxious when we first sent the demos. We quickly spoke to Philipp (who also knew our different projects at the times) and we worked on some new tracks especially for the label. It’s always amazing to hear your own tracks played by other Djs and we already played them a lot at our gig – they are working really well ! The vinyl release is coming soon though !

D : I have to say, that I actually started again doing music like this, because of Aufnahme + Wiedergabe. I was fascinated by the label and the variety of releases. I am glad I met Philipp and had the balls to send him our material, hahaha !

Z – As with the early artists in the Industrial genre, do you derive inspiration from your direct environment and translate those in your productions? Or is your work more an ode to musical heroes?

C : For me, it’s both. I mean, I’m living in the middle of nature so it’s hard to be always inspired by industrial or urban surroundings, but my trips in the big cities are a major influences. I have always been a big fan of cyberpunk and sci-fi books and movies and that plays a big role in my production. However, as an old fan of both techno/rave and industrial/EBM scene, I can also say that the music I’m listening is important for sure, but RENDERED is not a project based in the past or used to make an homage to the styles and scenes we are coming from.

D : I am always on the road, travelling, flying to shows, touring. And I love big cities, I love dystopian movies and literature. Since I first started doing music it´s part of me, part of my art.

Z – How do you position yourselves in the genres you’re currently operating and do you intend to explore further the crossovers that can be made? And are there techniques you have learned from each other while collaborating?

C : I learned a LOT since I’m working with Daniel, on every aspect of the production. It’s really awesome for me to be able to work almost every day with him on our stuff – it pushes me to work a lot on my studio abilities (from making new themes and melodies to samples works and mixdown.). Daniel has been making so much different music on so much different projects that we always find new ways and ideas for our tracks. I don’t see us limiting our studio works : our new demo is already sounding way different than the first one (both more ‘industrial’ in the oldskool meaning and ‘techno’ too) so I think we will continue making new music without really thinking about the style..

D : I never stop learning. And with this project it’s a big challenge for me. I actually started as a DJ, but I always was more a crowd pleaser. Of course I challenged myself and the audience, but in the end, I was not too experimental in my sets. From Clement I learned to push it. He is a great Club DJ and knows the dancefloors very well. So that helps a lot djing and producing.

Z – Creating a sound of your own involves being persistent and consistent. Furthermore, it might take several years to even know what direction you’re heading for. Can you tell us a bit about your journey as producers/djs/remixers until now? And as interestingly for fellow artists out there, have you ever felt lost and unhappy with the way you express yourselves musically?

C : I started playing records in ’94 – only making music a few years later on ’98. I was first making very hard and industrial stuff, or noise / dark ambient. But I have always thinking about me more as a DJ than a producer. I made a studio break for a few years because at the time, most of the music released was really not my taste (minimal stuff and bad hardcore..). I was always unhappy about my time in the studio and I totally stopped during 5 years. In 2012 I decided to spend again a lot of time working on new music and taking things seriously before I get too old. I also changed my names and that’s how I get back again. This time, Techno was really coming back again, you could feel it everywhere and I also took the thing more seriously than ever, working everyday. I also totally stopped promoting parties to focus on that. RENDERED was not something we first planned, it’s really the result of our work together. We quickly decided that the project was serious for both of us though !

D : The direction is pretty simple with RENDERED. It’s dark, it’s heavy, it´s club music. Techno, if you want to use a specific term ;). Since I first started, club music was a part of me. Starting in the 80’s with New Order, moving on to Acid House, moving on to Jungle/Hardcore and from there to the early Trance/Techno scene. I was always fascinated, because that’s where the innovation happened. In the clubs. I was never really lost. Unhappy of course a lot of times. But I always managed to get myself out of a certain funk…

Z – In which way is it still possible to innovate and distance yourselves from the redundancy in Industrial/EBM inspired techno created by continuous exposure? Is it a healthy practice to keep questioning the relevance of what you are doing?

C : It’s totally healthy, but always working in the studio to get new ideas and test things is also a very healthy thing to do. I think that the fact we have both a long experience into differents scenes is really helpful. I mean, we both lived amazing parties and long period of party euphoria (for me, from ’93 to ’99 for example) and also period where most of the music and people are not really connected to the things we like. Being older than almost everybody in the current scenes really helps having a more complete perspective – that doesn’t mean we don’t have ambitions and dreams, but we are maybe less running behind success, money, fame..

D : It is still possible to be innovative, if you don’t stick your head in your ass. Go out, explore the world. Be open and especially never stop learning. There are so many amazing artists out there, that you can learn from. The gear these days is incredible. So yeah, it’s okay to have doubts, but I think, we are not in the position, where we should question what we are doing. We are doing it for too long, and I must say, we managed to be quite successful in certain scenes. Now we are just taking it to the next level 😉

Z – With the most recent release for Body Theory upcoming, what lies ahead for RENDERED? And if we also may ask, what can we expect from 14anger and Architect, or other solo projects still running?

C : We are finishing a new demo and already have some new EPs signed for the end of the year – early 2018. We will be also touring a lot, playing both DJ and livesets around Europe and North-America. Expect a lot of RENDERED music in the next months!

Speaking as 14anger, some releases are coming but I’m slowing a bit down. You’ll be able to rave up with me around Europe anyway as I have some DJ sets planned.

D : And for Architect and my other projects there is always something ahead. A new single is coming soon. Another new Techno project is out now etc, etc… Never stop!